Coming from an immensely successful career within the Sales and Recruitment sector, Henry has proved to be an integral part of the Miniracing family. Henry has boosted the growth of the Miniracing.com brand and continues to exceed expectations at each event he hosts with his friendly demeanour, charm and professionalism.

"It has been an exciting and engaging journey thus far working with Miniracing.com, with the exceptional guidance I have received from Chris and Lydia working as a part of this world beating small team, I'm confident we can solidify Miniracing.com as a global brand even more so than it already is and I look forward to what the future holds!" - Henry 2022

Henry’s customer feedback and track record for turning customers into fans who book again and again, really speaks for itself!

“Thank you so much for the amazing Scalextric at our Christmas party! It was exactly what we needed to create a buzz – everyone loved it!!” - Lauren Titcombe

“There was a lot of positive feedback following the event so it is likely we will be in touch to book you again!” – University of West England

“I wanted to say thank you for the event last night. We had a lovely time and the feedback has been excellent.” – Bishop and Sewell 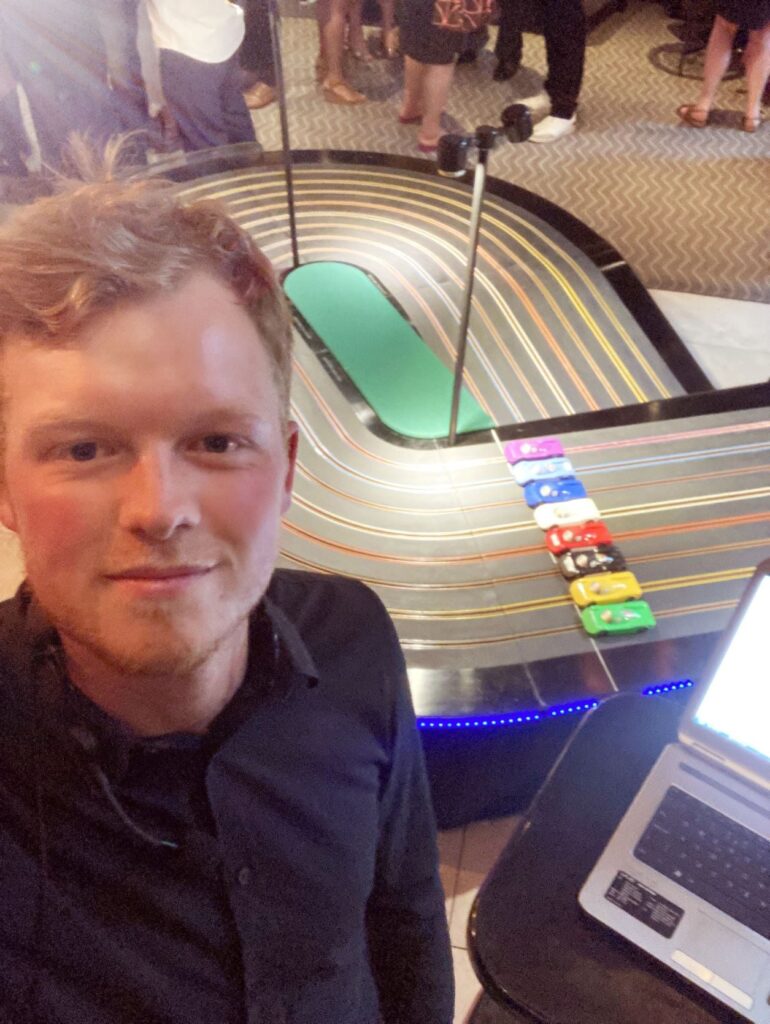 Founder of miniracing.com, Chris Lewington has built his career from the phenomenon that is Scalextric. With his incredibly extensive knowledge of engineering and extreme enthusiasm for innovative technology, Chris has worked continuously over the last 19 years to develop miniracing.com into the spectacle that it now is.

Read about the history of miniracing.com from Chris himself...

“I founded miniracing.com in 1997 after leaving a job in research and development for an engineering company. Just prior to this I bought a Scalextric track for our son’s birthday. Without prompting, the guys at work were very interested in coming round to play. So, it became clear that this was a toy that worked for all ages.

The racing was fun but with a 4-lane track we quickly lost count of laps and had no idea who was in the lead and if anybody was actually getting any good at the game. Reliable scoring was not available at the time. So the engineer in me decided to fix this….

Computerised scoring was the obvious solution. Once I had devised a suitable scoring system more evenings with friends, drinks and competitive racing were arranged. The introduction of scoring and rules confirmed how good Scalextric racing is. A fun game for all ages and abilities.

The story did not end there. Through the internet I found that others wanted to use my scoring system. One new user introduced me to the world of entertaining corporate groups using his giant 6-lane track and now my scoring system. However the poor reliability of the track on such a big scale was an issue. Paying guests expect a professional reliable set up.

When I quit my day job I set about building the perfect professional slot racing entertainment system. Fortunately my first attempt was technically good enough and customers greatly appreciated my efforts.

Success came not only from the equipment but from the competitive atmosphere that arose when I introduced an enthusiastic host to provide commentary during the game. Spectators and players love to see how well they were doing in relation to their peers!

Nearly 19 years of improvement to Scalextric and the overall event presentation have now passed. As the demand has increased I have not only expanded the miniracing.com family by developing both UFO and MiniBoots but I have also trained and equipped others to deliver entertainment of the highest standards. It still gives me the greatest pleasure seeing the show done properly.”

Head of Marketing and Communications

With a hugely successful background in children’s entertainment, promotions and events Lydia is an outgoing, hardworking and creative member of the team. Lydia’s passion for the MiniRacing.com has taken her to showcasing events not only across the United Kingdom, but globally too.

“Witnessing my father, Chris Lewington’s, unbelievable skill and dedication to creating these stunning and unique games has given me a deep rooted passion for Miniracing.com. The many thousands of hours that he spent in his garage have resulted in exciting, beautifully engineered entertainment equipment that is totally unrivalled by anything else currently on the market. So truly different and visual are our games that they are a joy to market and promote! Come follow us on Facebook and Instagram and share your event experience.” Lydia , 2016

“...I was told to give special mention to the gentlemen who manned the Giant Scalextric. He was humorous and very professional.”

“The evening was a great success and your team did a fantastic job!! Many thanks to you and your team for the excellent Execution.”

“I just wanted to write and thank you for the amazing job your colleague (Carl Stevens) did on Saturday evening. I didn't partake in the scalextrics but those that did loved it. Sometimes I'm dubious about putting on entertainment in a separate room to the main party but it worked perfectly. Drawing in enough guests to entertain without taking away too many! The doormen said listening to guests' conversations upon leaving, a huge proportion of them were raving about the scalextrics and how brilliant the guy was who was running it. I look forward to working with miniracing.com again.”

“It all went really well again thank you! Chris was great and everyone had a really good time. I'm sure we'll be in touch again soon re any further events.”